Xperia Z1 USB port cover fell of during normal use

We will be covering a series of post here where we will bring out some of the weird issues happening to Sony Xperia Z1. It is the “Best of Sony” yet but it seems in respect to its hardware quality and the firmware bugs it still lags. We first discussed here the yellow hue tint issue on Xperia Z1 which was acknowledged by Sony as per their change log of 14.1.G.2.257 firmware update but we can confirm and even many users that yellow hue tint on Xperia Z1 is still present and Sony is taking this issue as firmware bug though it likely seems to be an issue related to faulty panels used in Xperia Z1.

We on our part have replaced our Xperia Z1 twice from Sony on the account of same yellow hue tint issue and yet not satisfied. Let’s talk about another issue, as seen by an Xperia Z1 user. Lately during a normal use of Xperia Z1, his USB port cover fell of somewhere, weird it is.

First see the image of Xperia Z1 USB port cover not at its proper position. 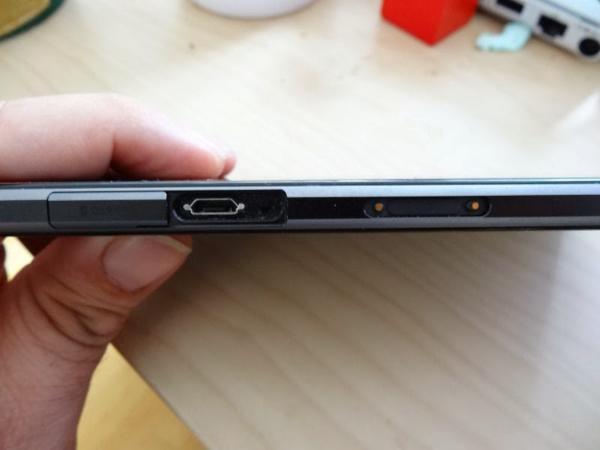 Let’s see what Jonas Luster quotes regarding his issue :-

And then it took precisely one week for this to happen. Apparently the USB charger port cover fell off sometime this weekend while taking pictures. We searched high and low but couldn’t find it anymore, it seems it fell out during the walk and not before, during, or after charging.

I’d been afraid this would happen, the latch felt very flimsy at first open and I am opening and closing it frequently since I don’t have a chance at using ADB over WiFi in many places.

Sony tells me I am shit out of luck and there is no way for me to get a replacement. That makes me a doubly sad panda, not having a waterproof phone now…

Well it seems terribly bad that it just came out. It certainly can’t be concluded that is it users negligence issue or an issue of faulty hardware but what’s the solution now. Is this replacement of part covered under Sony’s warranty. Well if you have a strong luck Sony service center may replace the part under warranty though we guess they may charge you an amount for the same.

You can avoid this issue by using Xperia Z1 magnetic charging dock DK31 or EC21 charging cable to charge your Xperia Z1 and use the Xperia Z1 USB port only when need to connect it via USB cable for some needful purpose otherwise do no frequently open your port flaps because if they fell of or broken your Xperia Z1 might not remain water resistant.

Are you looking for replacement for USB Port cover ?

WitRigs do have many replacement parts for Z1 like port covers for USB port, SIM card slot, Micro SD slot. Do check their stock also once if you are lucky you may find the perfect replacement part for your device. Check below link

After seeing this we were looking for some solution to get Xperia Z1 USB port replacement cover, found some but after applying them, does Xperia Z1 remains waterproof, a question of interest to us and many.

If you too have encountered any issue like this, do let us know in comments and the solution also what you did to have it back…

41 Comments so far. Feel free to join this conversation.