Xperia Z1 has already hit various markets across the  world now since its global launch on 4th Sept at IFA 2013 Berlin. Still North American countries are awaiting its official launch their. A few days back it was reported that Xperia Z1 will come on Bell and Telus ( both Canadian carriers ) in Canada. Just now a document has been leaked which shows pricing and launch date details of Xperia Z1 in Canada.

It is confirmed now that Xperia Z1 will sure come on TELUS Carrier and hopefully will be launched on 15 October Tuesday. No confirmation date for carrier Bell is seen till now but same is expected for it also.

Below leaked document shows that Xperia Z1 will be priced at $725 MTM pricing and $99 on a 2-year Pact. MTM pricing rate is somewhat similar to price on which Xperia Z1 was priced in other markets. 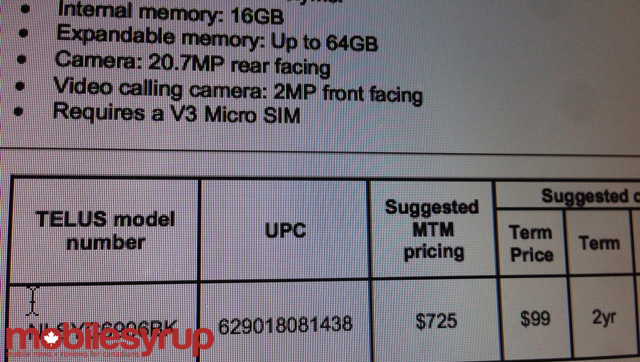 We are wondering whether they will give anything free with the Xperia Z1 like some other carriers did in Europe.

Let us know what do you think on the pricing of Xperia Z1 on Telus Carrier in Canada, drop your comments below.