Let’s have a close look at Red Nexus 5 hands on experience photos and a preliminary review.

Inside the Red Nexus 5 box you get a charger and a USB cable along with warranty cards and Red Nexus 5 😛 SIM ejection tool and quick start guide is also provided.

Below you can see the Red Nexus 5 out of the box. A protective file with Nexus 5 embossed on it is provided over screen.

At back panel of Red Nexus 5 there is 8MP rear cam and LED flash below it. At center Google’s signature “Nexus” logo is embossed and at bottom “LG” mark. It weighs around 130 grams. 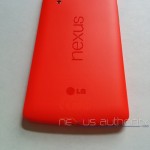 Red Nexus 5 feature 4.95″ 1080p HD screen with 1920×1080 resolution, screen ppi is 445 which is very impressive. Red Nexus 5 features IPS panel with Corning Gorilla Glass 3 protection. We have recently heard comments from Nexus 5 users, that Nexus 5 screen is very fragile and they got major cracks on it after a minor fall.

At top bezel of Red Nexus 5, hearing speaker is positioned at center with red speaker grill and front 1.3 MP cam at left side and proximity sensor at right side.

On the right profile of Red Nexus 5 there is power button and SIM tray.

On the left profile of Red Nexus 5 you got volume rocker keys which are black in color.

On the bottom side of Red Nexus 5, you get inbuilt micro USB port and two external speaker grills.

At top, you got 3.5mm headphone jack port.

Red Nexus 5 holds up all native KitKat features which you can expect like white icons in status bar, buttery smooth Android KitKat UI and a beast when it comes to performance.

If you have also bought a Red Nexus 5 then do let us know, do you like its Bright red color or it seems a bit odd to you like some users complained. Drop your comments below.