A sad news for many Xperia smartphone users, just now it is seen and CONFIRMED that Sony Mobile has planned to stop any further future android firmware updates for Xperia S, SL, Acro S, Arc S, Ion, P, U, Go, Miro, Tipo, J, Sola. We do agree that users of just mentioned devices may not feel good after reading this but that’s what Sony Mobile has decided. Many of the mentioned handsets are not available in market now and if they are, that’s not commercially profitable for the company.

Below you can find the detailed info on the last firmware update available for Xperia S, SL, Acro S, Arc S, Ion HSPA and LTE , P, U, Go, Miro, Tipo and Tipo Dual, J, Sola. Below info is taken from software “Support” section of respective devices.

At the moment Android 4.3 is awaited for Xperia SP, T, TX and V.

What do you think fellas on this ? As per us Sony Mobile has shown proper support when it comes to android updates, we do agree that they normally roll updates late but now they are consistent in rolling updates especially for Xperia Z family smartphones but they should also focus on mid range devices; ignoring them is not a good strategy from such a large firm. Do let us know what do you think on this. Drop your comments below.

One of the most amazing feature of Xperia Z camera; Superior Auto Mode and HDR mode definitely makes the 13 MP camera of Xperia Z far better than camera of any other phone. Xperia S, SL users were expecting these settings in the jelly bean update for them, but Sony missed it somehow which was disappointing.

So we have just brought you this tutorial on how to install / port Xperia Z Superior Auto Mode in Xperia S,SL,Ion Camera settings. Check the post below.

After confirming all above steps done as mentioned, proceed below. 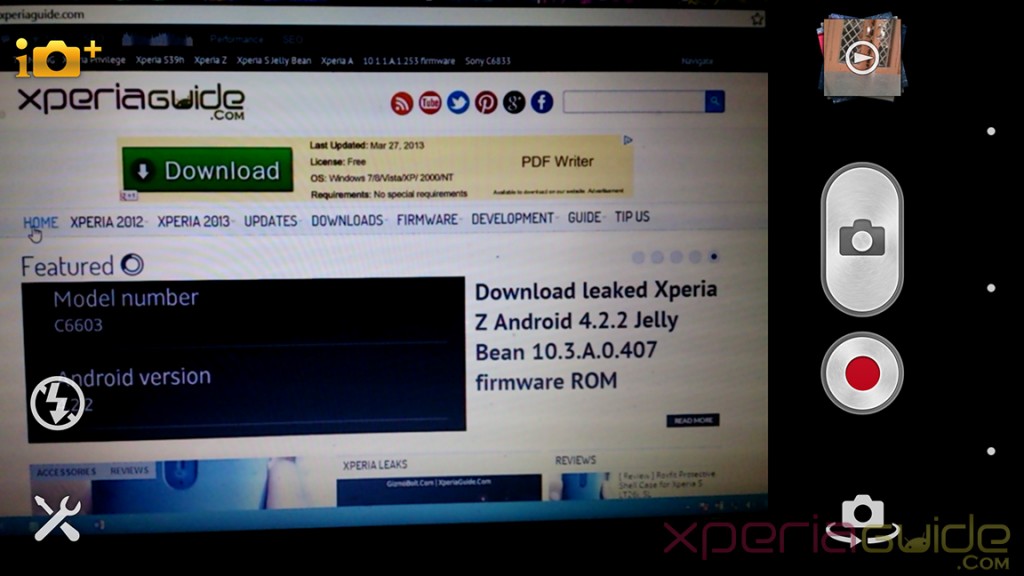 Before flashing this mod, please backup all your camera settings apks, in case you get any bugs in the mod you can restore it back.

Download the Xperia Z Superior Auto Mode flashable zip from given below link.

In case of Black Screen Bug, if faced

In case you are getting a black screen sometimes in while using your camera in Superior Auto Mode, please try installing the below given apks from Xperia Z System.

Try manually installing, if unable to do that, push them in system/app.

Let us know in case you find some bugs in this Xperia Z Superior Auto Mode mod for Xperia S, SL and Ion. Comment your feedback on this mode, if it worked for you or not.

For all Xperia Ion LT28h users, you can update your phone by visiting the given below link…

Xperia Ion LT28i was Sony’s first phone to have 4G LTE service and this firmware will be supporting this. Let’s hope Sony will roll out this firmware or another one very soon for Xperia Ion. As Xperia Ion users are desperately waiting for this.

A news of relief for Xperia Ion HSPA Lt28h users that new Jelly Bean 6.2.B.0.211 firmware has been certified by PTCRB on  June after they previously certified 6.2.B.0.204 firmware. Sony recently rolled out Jelly Bean 6.2.B.0.204 firmware for Xperia S LT26i, Xperia SL LT26ii and Xperia Acro S LT26w but soon many users have reported some serious bugs in the firmware. So Sony decided to update the firmware for Xperia S, SL and Acro S as 6.2.B.0.211 which will be rolled out in the 23-24 week of 2013. If any Xperia Ion LT28i user is interested in installing the leaked Jelly Bean 6.2.B.0.203 firmware on his phone, check out our guide on it.

The 6.2.B.0.204 firmware has been certified on May 16, 2013 on PTCRB official website. It’s good news for all those Xperia Ion users who were desperate to know when the jelly bean firmware will be certified for Xperia Ion as we recently saw Jelly Bean 6.2.B.0.197 firmware being certified for Xperia S / SL / Acro S. Let’s see when Sony will release the android 4.1.2 Jelly Bean officially for all these 4 phones left out now. Hopefully it does by the end of month May as it said. What do you think regarding that, excited for jelly bean huh 😉 Jelly Bean 6.2.B.0.203 firmware ftf file for flashing is only for development devices. Do not flash it on your user device (RED).

Now if you are thinking of flashing this firmware on your Xperia Ion, wait please, as  the leaked firmware 6.2.B.0.203 by DooMLoRD is in development phase till now, the ftf file for flashing  jelly bean fimrware 6.2.B.0.203 will be uploaded soon.

[ UPDATE ] Kernel for leaked Xperia Ion LT28i  jelly bean fimrware 6.2.B.0.203 you can download from given below link.

Till now there is speculation on XDA forum that will this ROM work on both Xperia Ion LT28i and LT28h. It seems it should work.

Do check the source of this leak below this post more development issues regarding Xperia Ion Jelly Bean and if you face any issues you can report here and there also. As we have now seen for all Xperia S, SL, Acro S and Ion jelly bean firmware leaks we may soon see Sony releasing official jelly bean firmware for all these 4 handsets. We will keep you posted as more details about official jelly bean comes out. If you need any file for flashing the above firmware on your Xperia Ion LT28i, do let us kno win comments section we will upload it and get you the link.