Xperia Z1C aka Xperia Z1 Compact is the first true mini smartphone ever produced by any company yet, it supports exactly the same CPU, GPU and other specs what Xperia Z1 features. Xperia Z1 Compact is released in 4 variants of bright colors viz. Black, White, Pink and Lime and will be available globally for purchase in February 2014.

Let’s have a look at the specifications of Xperia Z1 Compact in brief :-

Pre-Order for Xperia Z1C aka Xperia Z1 Compact for carrier bases devices has started in UK now. At present it is available under Vodafone, Orange and EE with phone bearing no cost and you get some complimentary gifts also.

White papers pdf are available now while quick user guide is yet to be uploaded by Sony.

We will list detailed specifications of Xperia Z1 Compact on a separate page very soon. What do you think guys, planning to buy Xperia Z1 Compact as it is the first every true “MINI” version of a smartphone produced on planet Earth. We are impressed a lot 🙂

Time has come, year’s first international tech show CES 2014 is here now. CES 2014 continues from 7th Jan – 10th Jan 2014 at Las Vegas, USA and on 6th Jan Sony Mobile will hold a press conference. It is being already confirmed from Sony that on 6th Jan there will be a press conference, curious thing is that are they going to announce new handset on the very same day.

Press Conference may start with keynote from Sony Mobile CEO Kazuo Hirai and what Sony has brought this time new for the users, a new handset, a new TV technology or anything else.

You can now view watch Sony’s CES 2014 Press Conference Live, 6 Jan at 5pm from Las Vegas. Below you will find the live video streaming which will go on air at 5 PM ( PST ) on 6 Jan.

Check the local timings of Sony’s CES 2014 Press Conference timings as per your region.

Rumors are that Sony may announce international version of Xperia Z1 Mini ( aka Sony D5503 ) exclusively and very less chances of announcing any new flagship device as they already mentioned that Xperia Z1 will remain flagship in 2014. Above space will be be updated LIVE as when the conference begins. 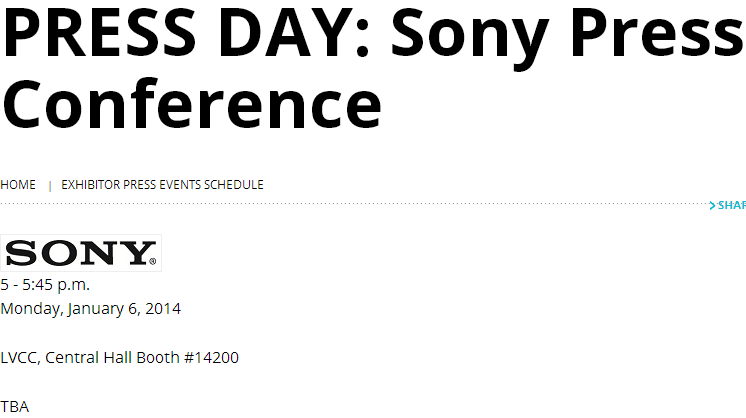 Stay tuned as soon as the event comes up, we will post the live video streaming of Sony’s press conference at CES 2014 on our blog. [ Source – CES 2014 ]
Search Here…