As per @ViziLeaks, Sony will be using a metal design for Xperia Z4 (previously they used glass). Sony signature power button in Xperia Z4 gets a refreshed design with built-in touch finger print sensor.

As seen in the tweet made by @ViziLeaks, Xperia Z4 is tipped to come out in Septemeber, hopefully at IFA 2015.

Sony’s going all metal with the #Z4. Iconic power button getting a refresh too with a built in touch finger print sensor. Out September.

Well, still it is not clear that is Sony going to two introduce two Xperia devices i.e. Xperia Z3 Neo & Xperia Z4 within such short period of time or only Xperia Z4.

What do you think guys, is going all metal and putting touch finger print sensor in Xperia Z4 is a good idea. Let us know.

Xperia Z4 series is expected from Sony seeing the previous lineup but will they feature the same specifications as posted below is a matter of question right now. It can’t be guaranteed that below posted specifications are true or false so take it with a pinch of salt for the time being. Let’s see what Sony is holding for new Xperia Z4 series.

In below you can see the latest Xperia Z3 series devices. 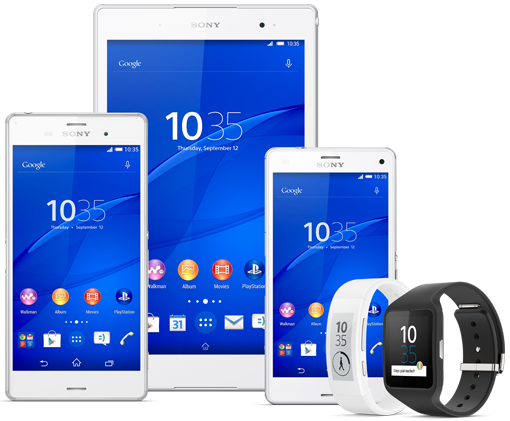 Sony is expected to launch Xperia Z4 Tablet at the same time when Xperia Z4 will be unveiled. It will be again 10.1″ but a QHD Display. It is believed that Sony is also testing 2840 x 2160 px display but the final retail device is expected to come with QHD display only rather than ( 4K ). It is expected to sport the same design as Xperia Z3 Compact but with much thinner bezels as compared to Xperia Z2 Tablet.

Stereo speakers will be present and it is expected to come as one of the thinnest and light 10″ tablet. It is rumored to come with Qualcomm Snapdragon 810 MSM8994 64-bit chipset Octa-core processor 2.8 GHz, 32 GB internal storage, 4 GB RAM, 13 MP rear cam and 8 MP front cam.

After a long time Xperia Z Ultra’s successor is reported. Xperia Z4 Ultra is expected to come with 6.4″ display with QHD resolituon or 4K resolution. Not much is available on Xperia Z4 Ultra for the time being.

What do you think guys about the rumored specifications of Xperia Z4 series. Let us know, drop your comments below.

Source – AndroidOrigin | Thanks for the tip, Ben!