Xperia Z2 Tablet magnetic charging dock DK39 is priced at £39.99 in UK, €45 in Spain, Netherlands and France, €29 in Italy, €39 in Germany, 369 kr in Sweden and 139 Polish złoty in Poland. It is right now under coming soon and soon will be available for sale from Sony online stores.

You will get 1 user manual, warranty card and you get 1 adapter only this time. 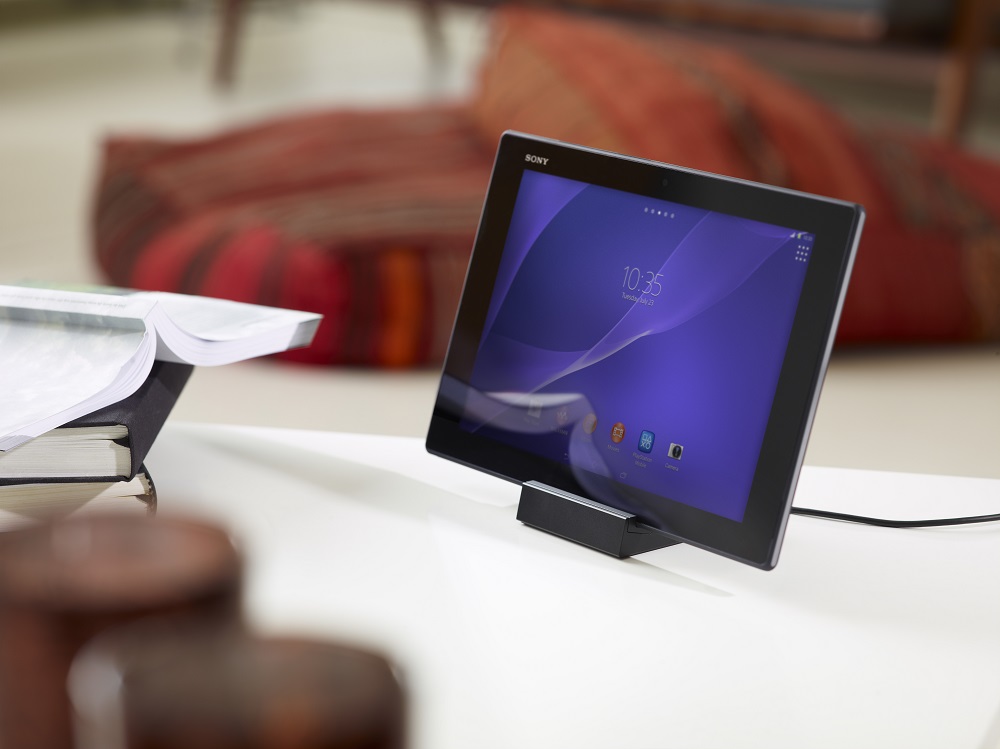 Again we are saying we would like to see Sony also selling EC21 magnetic charging cable separately, it would become a lot easier to charge the devices.

What do you think guys, is it Xperia Z2 Tablet magnetic charging dock DK39 overpriced or not ? Let us know, drop your comments below.

Xperia Z2 magnetic charging dock DK36 is priced at £24.99 in UK, €39 in Spain, Netherlands and France, €24 in Italy, €29 in Germany, 269 kr in Sweden and 119 Polish złoty in Poland. It is right now under coming soon tag but will be available very soon for either purchase or pre-order.

Check below the listing of magnetic charging dock DK36 at various regions. 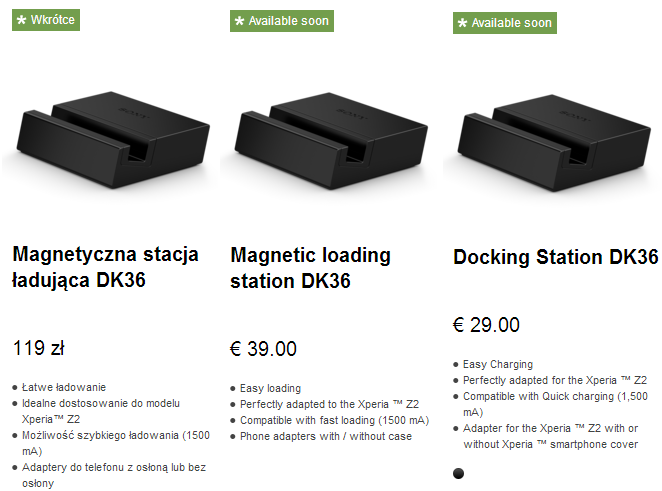 As usual 2 adapters are provided so that Dock DK 36 can also be used with protective case on Xperia Z2, micro USB charging point and can be only connected via AC Adapter not via PC. Available in Black color only.

Below you can see the Xperia Z2 resting on magnetic charging dock DK36. 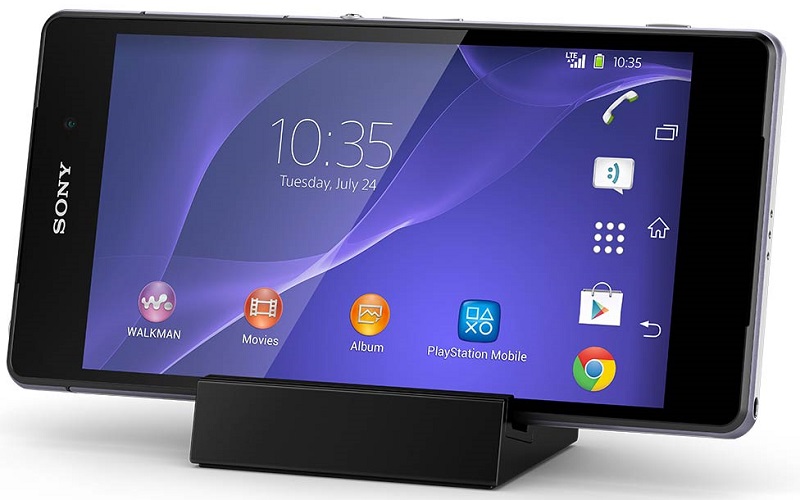 It would be good if Sony also provide the EC21 magnetic charging cable which is fitted inside this Dock DK36 then it will become a lot easier to handle.

Again Sony has priced this plastic dock a bit expensive which is a view point of many users just like us. What do you think guys. Drop your comments below.

We can’t say at this moment that for which phone is this Sony Magnetic Charging Dock DK36 really for as in the official Sony user guide also it is not written except for the “signed declaration from Sony for Conformity of Dock DK36”. 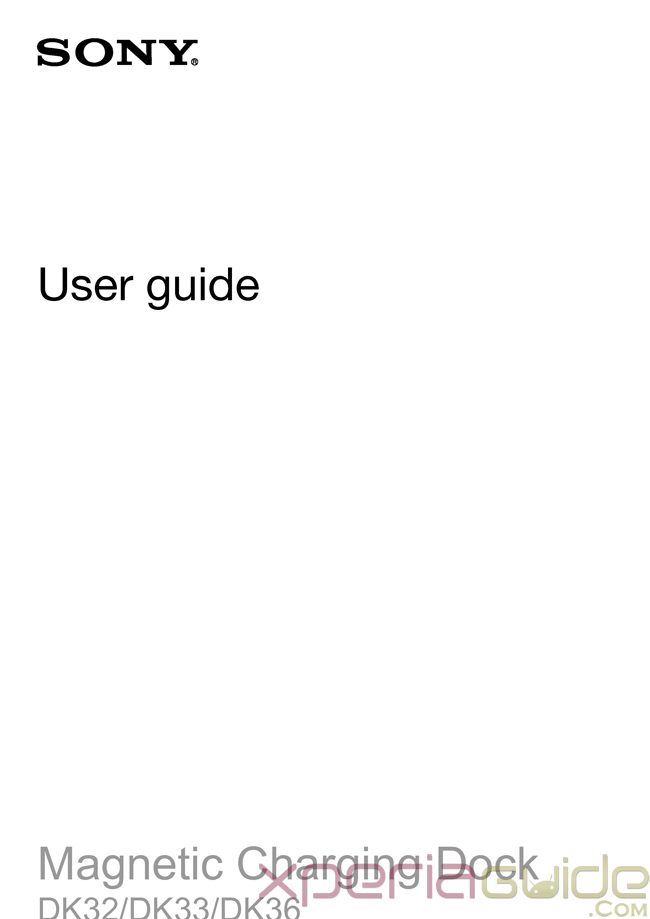 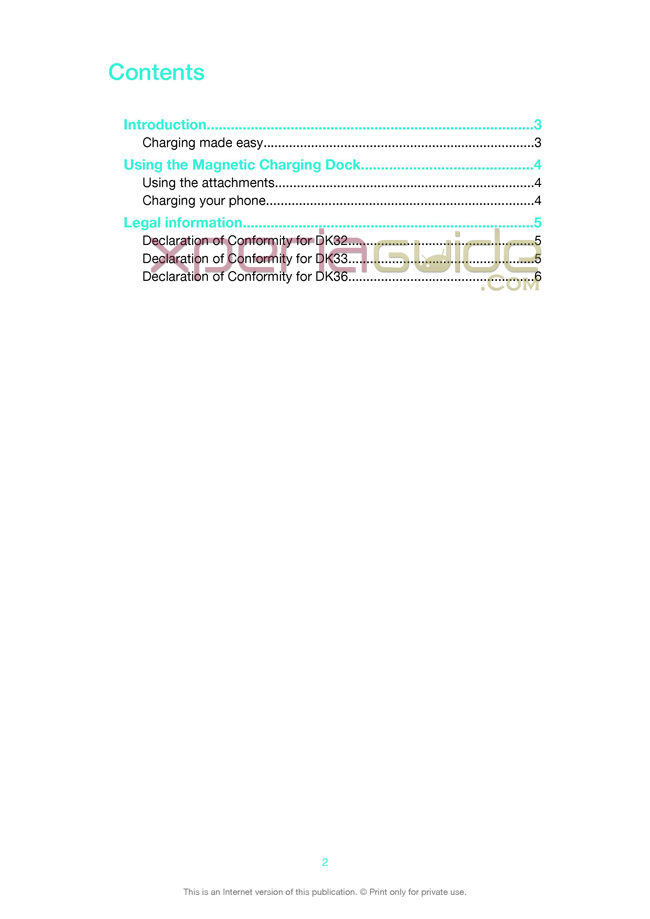 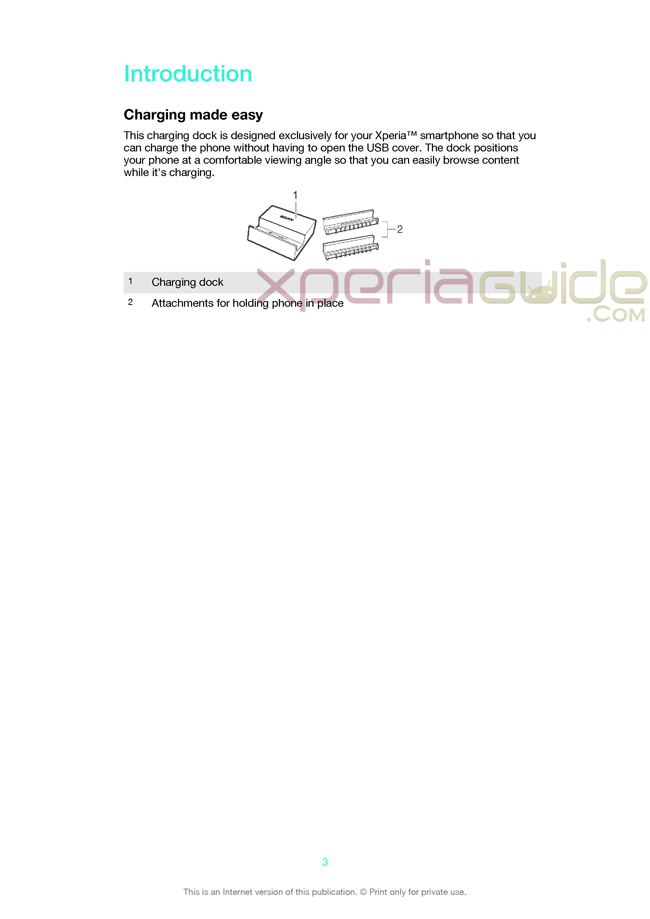 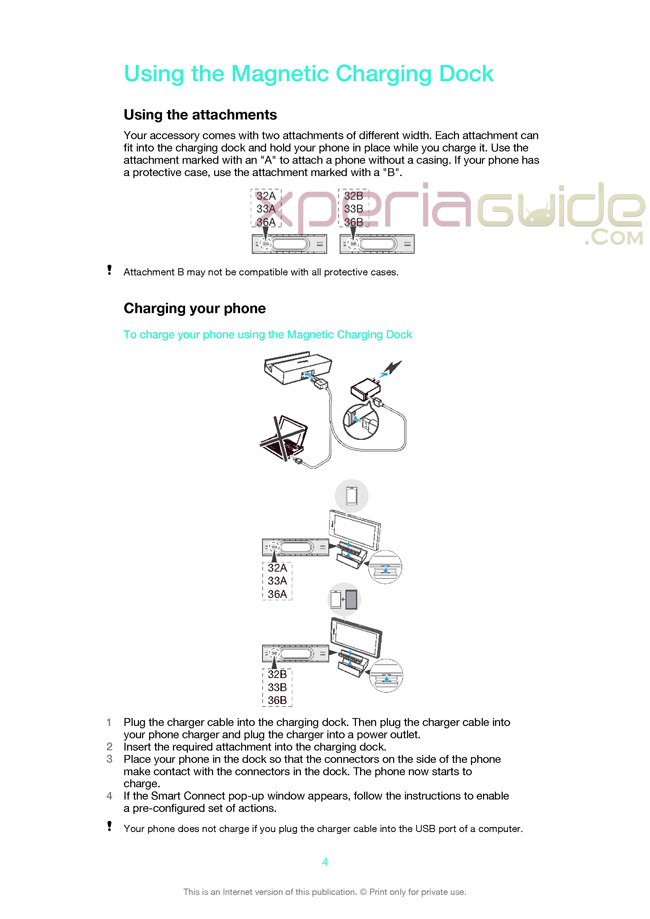 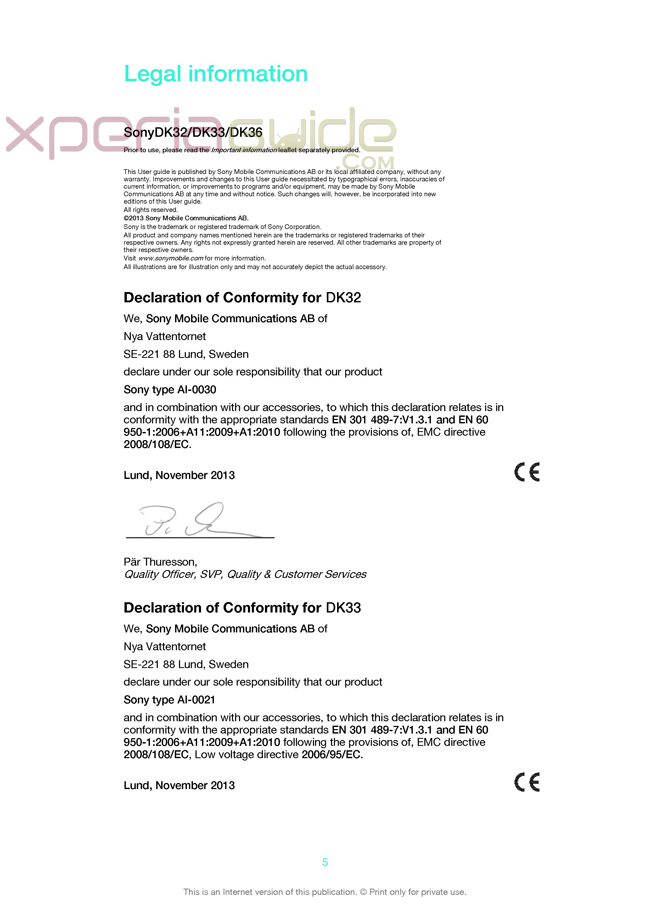 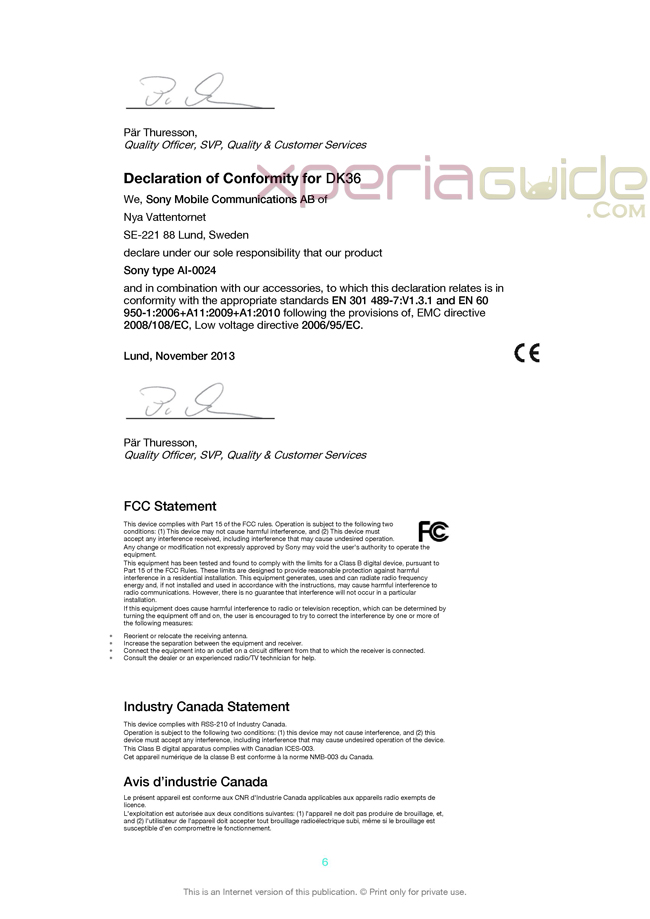 Speculated Theory :- Sony Magnetic Charging Dock DK36 is compatible with which new Xperia handset is still unknown. If follow the theory as DK30, DK31, DK32, DK33 dock are for Xperia Z Ultra, Z1, Z1 Compact and Z Ultra Wi-Fi Tablet respectively so not seen anywhere Sony Magnetic Charging Dock DK34 and DK35 should be for Sony D6603 and D6503 ( may be not in that order ) as we have recently seen Sony D6603 and Sony D6503 in pictures, AnTuTu benchmark database and even full android 4.4.2 KitKat UI was revealed for Sony D6503. Sony D6603 and Sony D6503 may launch at MWC 2014 event,

Above theory leads us here that Sony Magnetic Charging Dock DK36 is may be for some future device like very much rumored Xperia Z2 coming as next flagship device from Sony for year 2014 or it may end up being compatible with Sony D6603 and Sony D6503 but it is not expected that Sony will launch the same Sony Magnetic Charging Dock for both phones and like before they will launch two different dock separately.

[ UPDATE – 22 Jan ] A listing on  MobileFun shows that Sony Magnetic Charging Dock DK36 is available for purchase for Xperia Z2. We can’t say how real is this listing is but it says price is £29.99

What do you think fellas ? For which device Sony is planning to launch Sony Magnetic Charging Dock DK36 really. Do let us know what is in your mind, drop your comments below 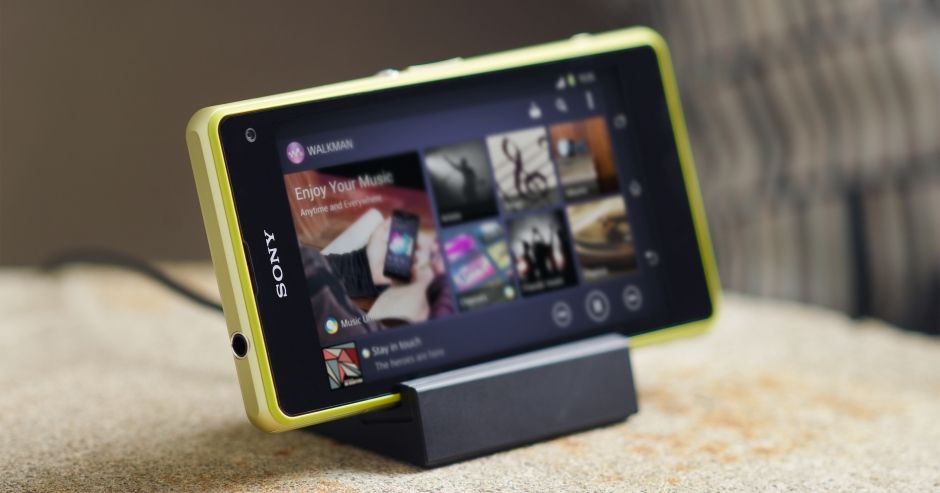