Earlier today we saw that Sony is planning to launch Xperia Z4 Tablet at MWC 2015 and now it seems we will also see Xperia M4 Aqua at the same event. Xperia M4 Aqua will succeed Xperia M2 Aqua and it will be IP65/68 certified as the name “Aqua” suggests.

Exact specifications of Xperia M4 Aqua are unknown at the time but it seems it will sport a 5″ 720p HD display with Snapdragon 410 processor, 1 GB RAM and 2300 mAh battery.

Sony has already released Xperia E4 and Xperia E4g recently with a price tag of $150 approx and now one flagship tablet and mid range device is on verge of launch.

Are you excited for Xperia M4 Aqua, drop your comments below.

A sad news for many Xperia smartphone users, just now it is seen and CONFIRMED that Sony Mobile has planned to stop any further future android firmware updates for Xperia S, SL, Acro S, Arc S, Ion, P, U, Go, Miro, Tipo, J, Sola. We do agree that users of just mentioned devices may not feel good after reading this but that’s what Sony Mobile has decided. Many of the mentioned handsets are not available in market now and if they are, that’s not commercially profitable for the company.

Below you can find the detailed info on the last firmware update available for Xperia S, SL, Acro S, Arc S, Ion HSPA and LTE , P, U, Go, Miro, Tipo and Tipo Dual, J, Sola. Below info is taken from software “Support” section of respective devices.

At the moment Android 4.3 is awaited for Xperia SP, T, TX and V.

What do you think fellas on this ? As per us Sony Mobile has shown proper support when it comes to android updates, we do agree that they normally roll updates late but now they are consistent in rolling updates especially for Xperia Z family smartphones but they should also focus on mid range devices; ignoring them is not a good strategy from such a large firm. Do let us know what do you think on this. Drop your comments below.

Sony rolled Android 4.2.2 on Xperia M Dual but it left Xperia M on android 4.1.2, the then Xperia M users are asking us when they will get android 4.2.2 update. As per Sony’s earlier plan for android 4.3 update, only a few phones will be getting android 4.3 for now and the ones which are left are Xperia M, Xperia L, Xperia E, Xperia C.

We just noticed on Vodafone Australia blog where they have posted a software update schedule for some handsets, it seems Xperia M will directly be updated to android 4.3 from android 4.1.2, at present status of Xperia M android 4.3 is “testing scheduled”. Besides Xperia M, Xperia SP and TX are also seen with android 4.3 status as in “testing”. 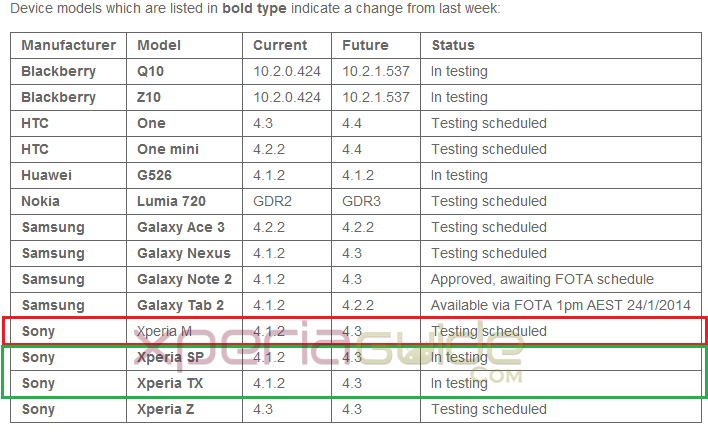 Check below the copy of our conversation with the Vodafone Australia support on Xperia M Android 4.3 update confirmation. 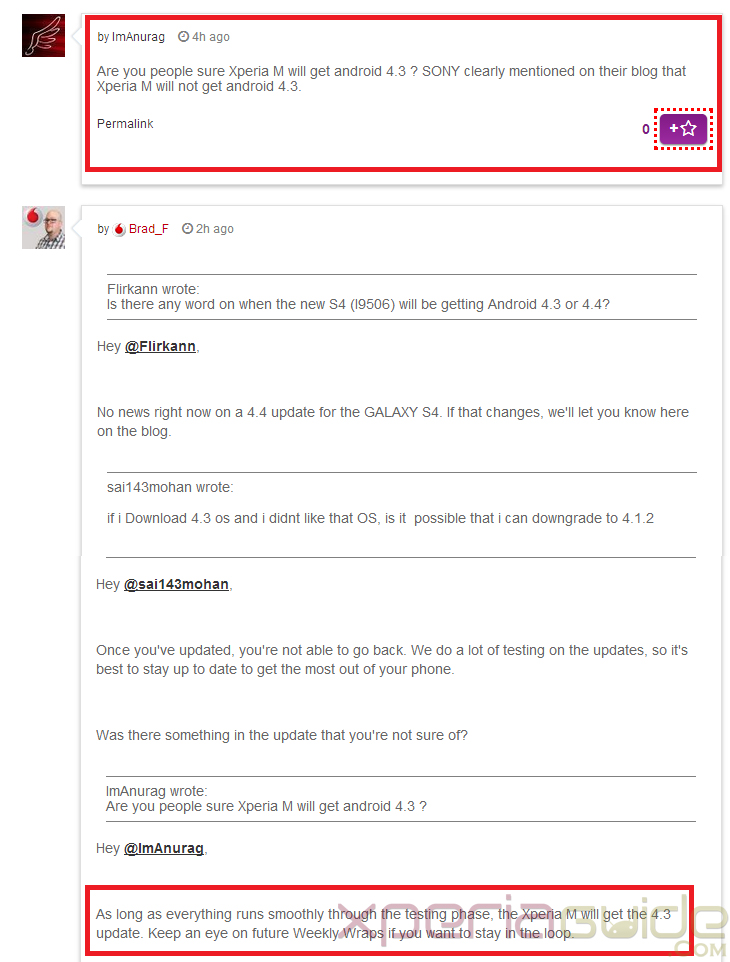 If somehow Xperia M gets Android 4.3 update by chance then it will be a big surprise for us as Xperia L left out with android 4.2.2 update and Xperia M getting Android 4.3. Kindly note that it may or may not come, as Sony has not come up with any official word on Android 4.3 for Xperia M till now.

How do you feel Xperia L users, if Android 4.3 is rolled on Xperia M in future and nothing for Xperia L. What do you think Xperia M users, excited about android 4.3 huh ? Drop your comments below.

Soon we can expect now that Android 4.2.2 Jelly Bean will hit Xperia Tablet Z SGP321. Sony has been busy now updating all their Xperia 2013 and Xperia 2012 line up. We only expect it to be a bug free update whenever it comes.

A few days ago, Rooting kit for Xperia Tablet Z SGP321 android 4.1.2 Jelly Bean 10.1.1.A.1.307 firmware was made available by DooMLoRD. If you want to root your Xperia Tablet Z then use the version 14 of DooMLoRD Easy Rooting Toolkit. If any Xperia Ion LT28i user is interested in installing the leaked Jelly Bean 6.2.B.0.203 firmware on his phone, check out our guide on it.

The 6.2.B.0.204 firmware has been certified on May 16, 2013 on PTCRB official website. It’s good news for all those Xperia Ion users who were desperate to know when the jelly bean firmware will be certified for Xperia Ion as we recently saw Jelly Bean 6.2.B.0.197 firmware being certified for Xperia S / SL / Acro S. Let’s see when Sony will release the android 4.1.2 Jelly Bean officially for all these 4 phones left out now. Hopefully it does by the end of month May as it said. What do you think regarding that, excited for jelly bean huh 😉

Sony Xperia France has just tweeted about a new Jelly Bean Android 4.1.2 10.1.1.A.1.253 firmware which is rolling out on Xperia Z handsets. Looks like Xperia Z is lucky to have so many firmware updates yet on Jelly Bean alone for better performance. The update still puts Xperia Z on android 4.1.2 jelly bean. Previously it was on 10.1.1.A.434 firmware build number. Update of Xperia Z C6603 on Jelly Bean 10.1.1.A.1.253 firmware has been confirmed in countries like India, Philippines, Indonesia for C6602, Vietnam, Malasiya, Thailand, France, Singapore. Connect your Xperia Z C6603 to PC via PC Companion, check if you have got the notification for 10.1.1.A.253 firmware update, if yes proceed as per screen instruction. First of all download your region’s firmware ftf file from given below links.

If any one wants Xperia Z blob files, Download blob files from given below link.

Connect your Xperia Z to PC via PC Companion, check if you have got the notification for 10.1.1.A.253 firmware update, if yes proceed as per screen instruction. For those who are not able to update it via PC Companion, update Xperia Z via Sony update service, check how to update via SUS.

It’s good that Sony has updated Xperia Z to a newer firmware version fixing some serious issues and updating new features. Well if you need any help in flashing or updating your Xperia Z C6603 on Jelly Bean 10.1.1.A.1.253 firmware, do let us know we will help you out in comments. Well if you have already updated to this new firmware version then do let us know what more changes you noticed in the updated 10.1.1.A.1.253 firmware.

Do let us know if find anything else updated in this firmware.

As Sony promised that Xperia S, SL and Acro S will be getting android 4.1.2 jelly bean update at the end of month May and soon after that announcement we saw XDA developer DooMLoRD leaking the  android 4.1.2 jelly bean firmware 6.2.B.0.197 for Xperia S and SL. Well not very difference in both firmware’s build number. It seems Sony has done testing the jelly bean firmware for Xperia S/SL/Acro S and a slightly tweaked version was leaked. Check the listing of Xperia S Android 4.1.2 Jelly Bean firmware 6.2.B.0.200. A lot ago we saw firmware 6.1.G.0.0 listed for both Xperia S and SL but none of them was updated on that firmware. PTCRB has certified a newer firmware version 6.2.B.0.200 for Xperia S/SL/Acro S on their website. It is assumed to be the latest android 4.1.2 jelly bean version which we will see officially updated to them soon.

From the leaked jelly bean version of Xperia S and SL we saw many new features added to them and expecting a fresh update for Xperia S/SL/Acro S which will remove the agony and frustration of the users who have waited so long for jelly bean update. You can Check the listing of Xperia SL and Acro S Android 4.1.2 Jelly Bean firmware 6.2.B.0.200.

A lot ago we saw firmware 6.1.G.0.0 listed for both Xperia S and SL but none of them was updated on that firmware. All the three handsets Xperia S LT26i, Xperia SL LT26ii and Xperia Acro S LT26w are a lot identical phones so all three of them will be updated with same android 4.1.2 jelly bean firmware build number, hopefully with same features. Well it’s only 2 weeks more till we expect them to be officially updated.