Xperia Z1 has just been officialy unveiled at IFA 2013 Berlin event and all leaks have comes true now as expected. The World has finally seen the “Best of Sony” in form of Xperia Z1.

Well all these specs make Xperia Z1 areally great wonderful smartphone, but does all those things in a smartphone comes for a cheap price, certainly No.

Xperia Z1 has been officially priced at €649 ( 649 Euro ) in Germany ( RRP ) and will be available for sale, later in September only in Black, White and Purple color.

No further info on the exact date on which Xperia Z1 will go for sale in Germany is available till now.

Considering the high price of Xperia Z1 in Germany, it is expected that at around £500+ we can expect it to launch in UK. No Xperia Z1 Price in India info is available. It is rumored that on September 18-19, Xperia Z1 will be officially launched in India.

In case you want to look at the detailed specifications of Xperia Z1, please refer the link below.

Stay tuned to us, we will bring more update on Xperia Z1 soon. Let us know do you think Xperia Z1 is over priced ?

Finally the World has seen the #bestofSony officially at IFA  2013 Berlin, it’s quite obvious Xperia fans were waiting for so long for the official unveiling of Xperia Z1 after so many fascinating leaks and teaser images and videos. Coming to the main attraction of this post, let’s see what Sony has given world in #bestofSony Xperia Z1.

Xperia Z1 the successor of Xperia Z marks the beginning of camera-centric smartphones from Sony under tag “One-Sony” 🙂 With  20.7 MP camera with 1/2.3″ sensor with G-Lens, 5″ screen FHD Triluminos display with X-Reality for Mobile and powered by 2.2 GHz Snapdragon 800 processor with Adreno  330 GPU unit. 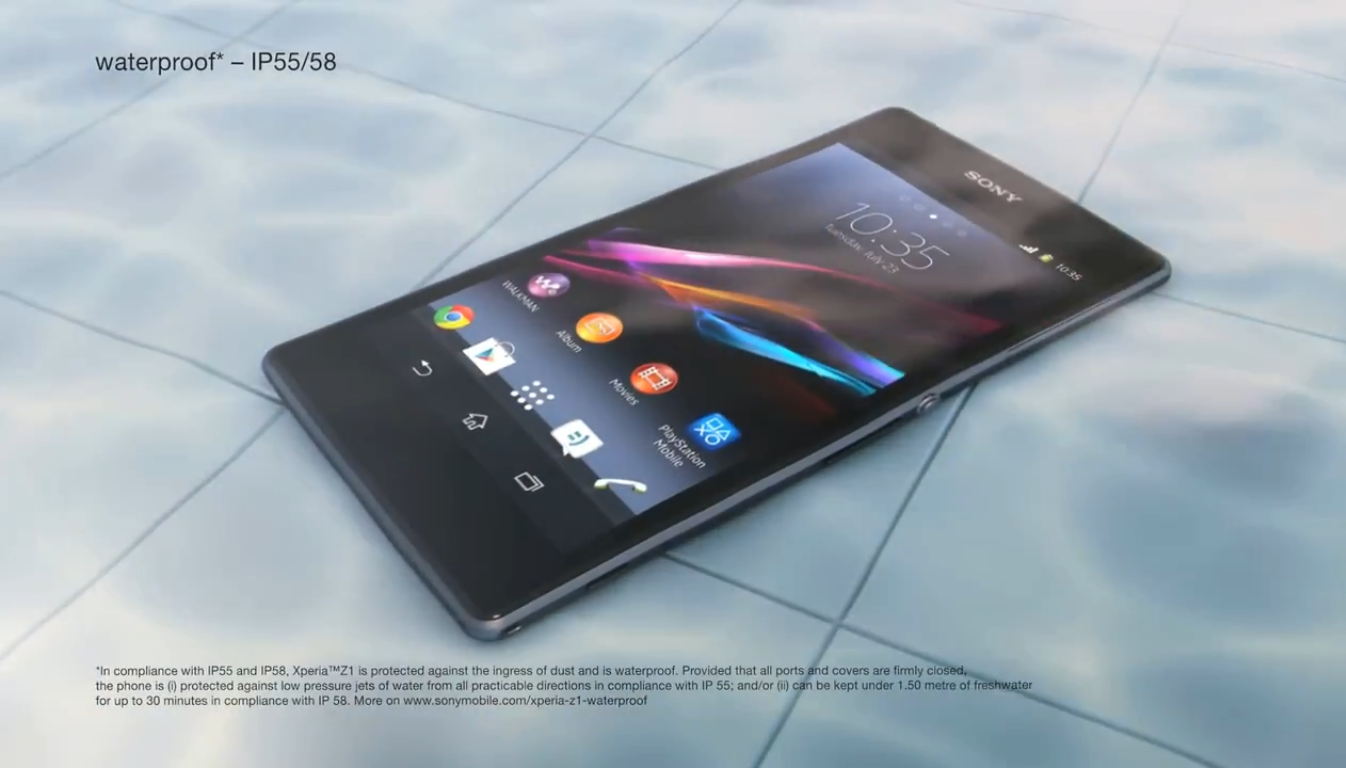 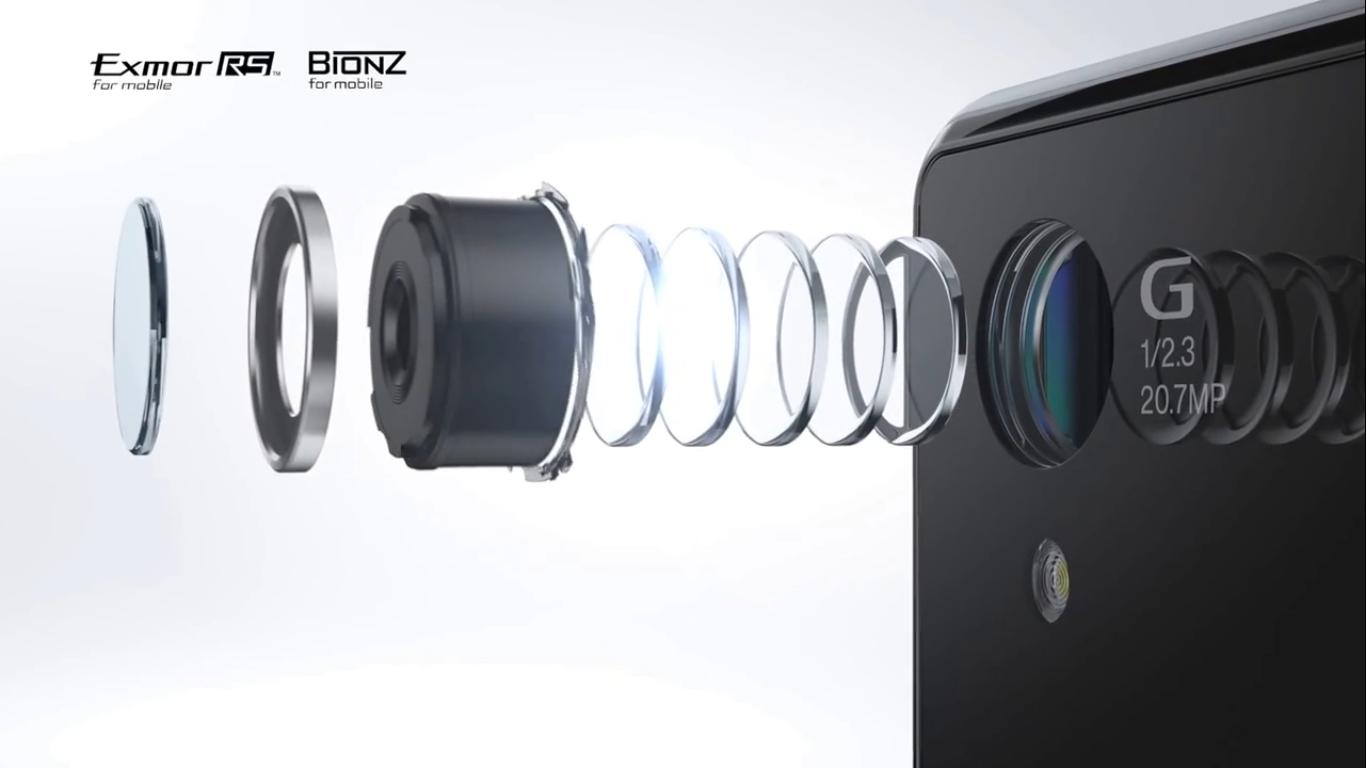 We will soon update you with the Official Xperia Z1 press images, price and the global launch date.

What you have to say now, Does Xperia Z1 live upto your expectations ? Drop your comments… 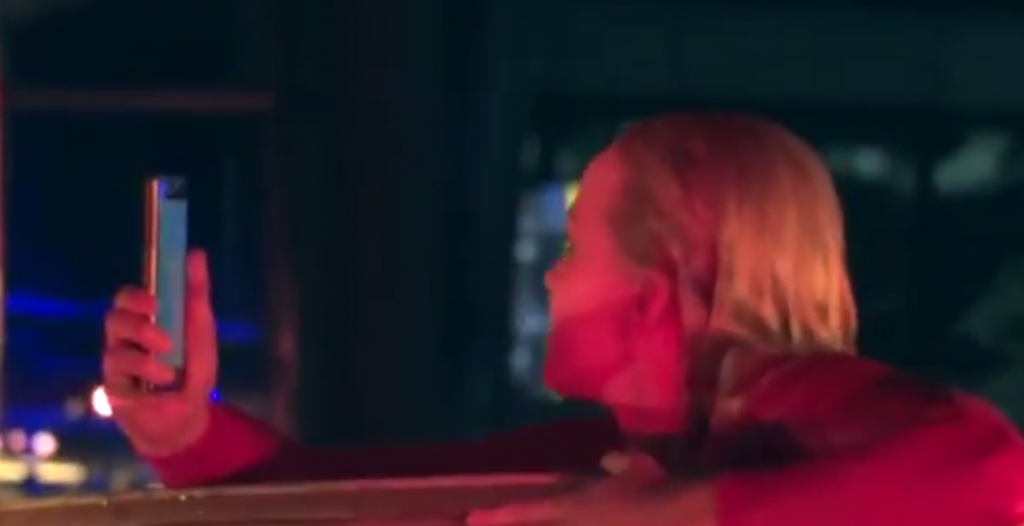 Just a day before the launch of Xperia Z1, a tipster has revealed all the cards of Sony before the main event of IFA 2013 and now we have the full official list of Xperia Z1 Features.

Check below the official press release papers of Xperia Z1… 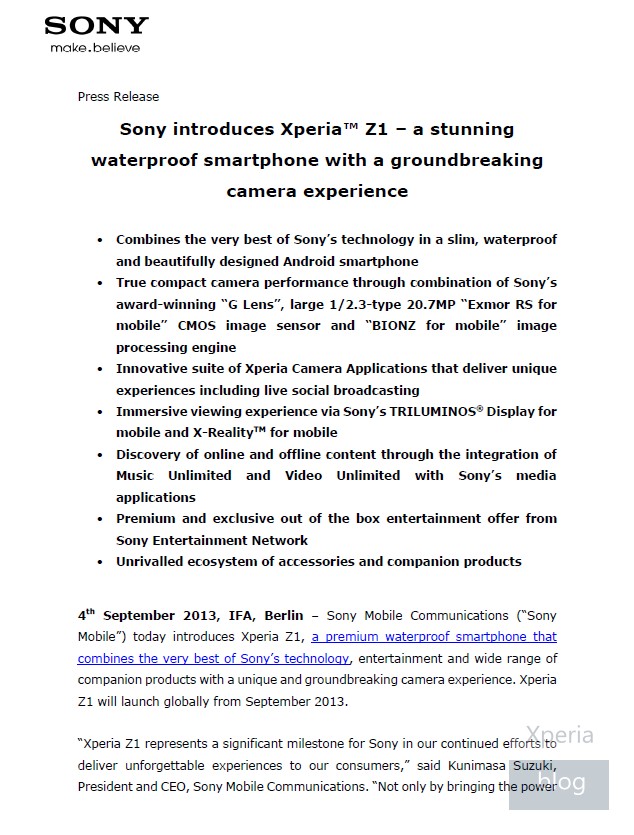 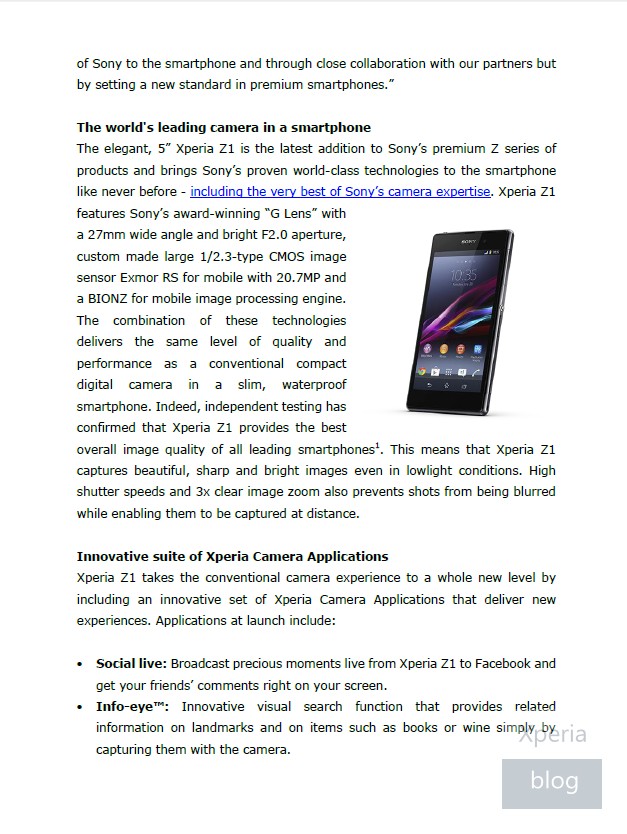 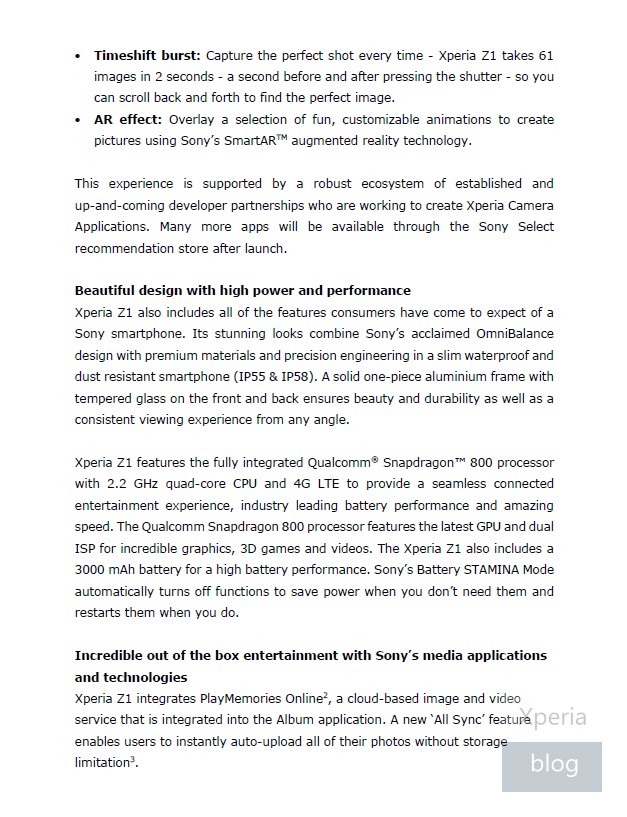 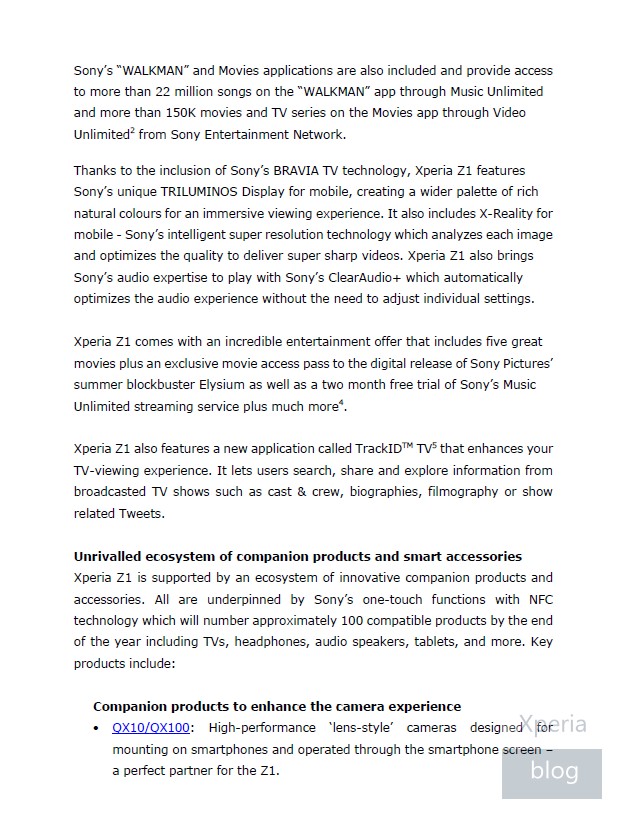 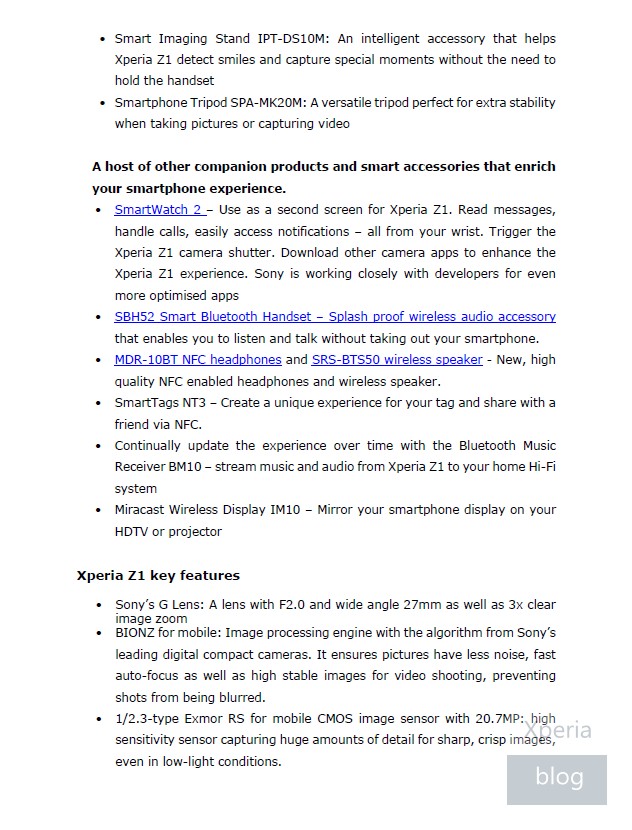 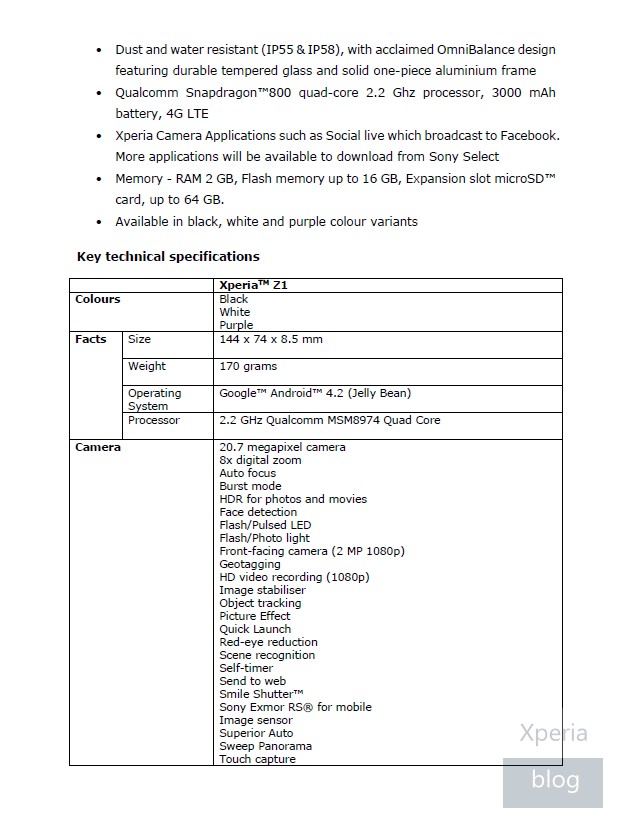 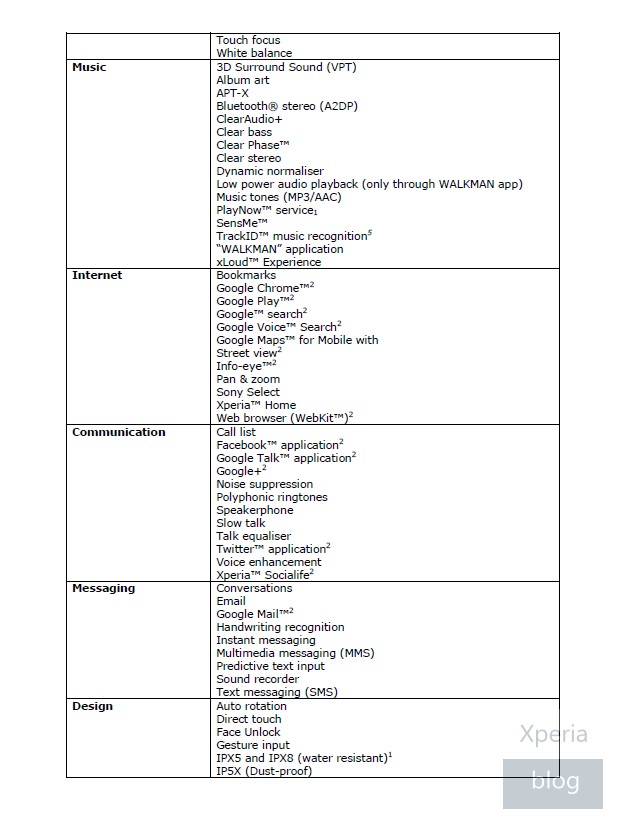 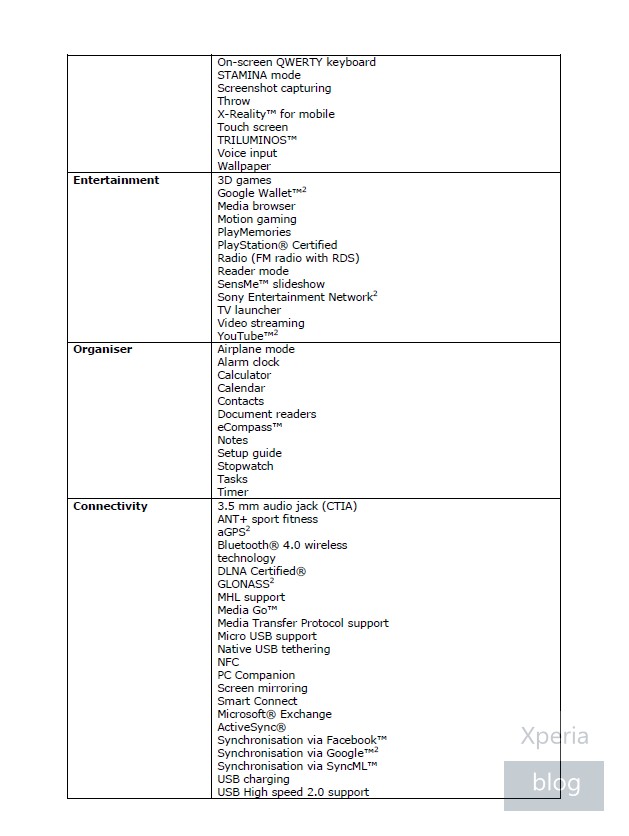 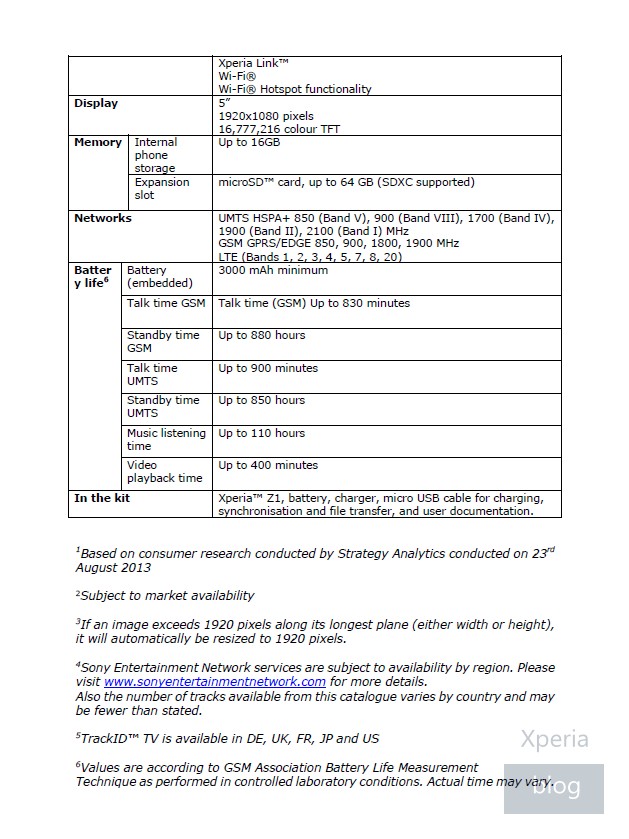 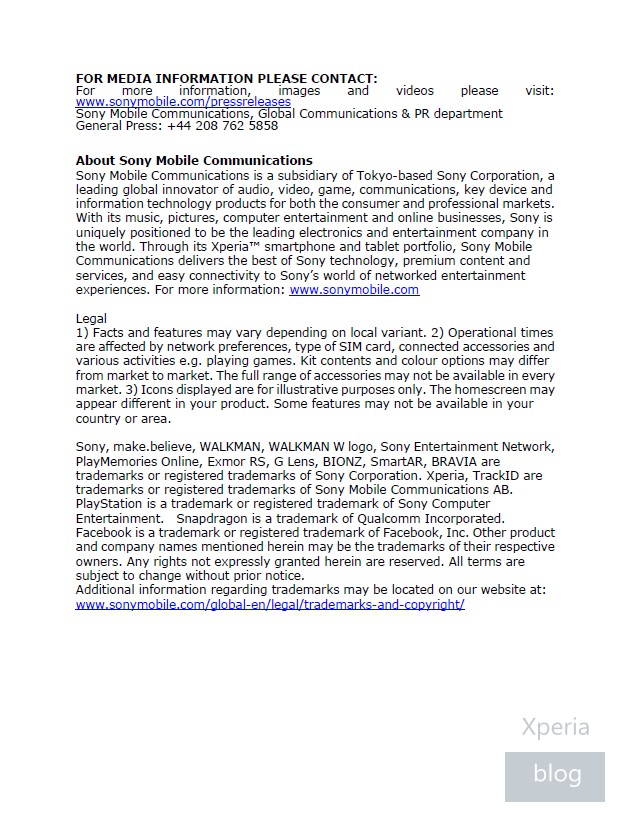 What do you have to say now ? Did above official Xperia Z1 press release papers blow your mind…Drop your comments.

A great news for all Xperia fans. Xperia Z1 is the biggest attraction of IFA Event at Berlin 2013 for Sony Mobile camp. Big news is that now Sony’s IFA 2013 Press Conference will be live video streamed and now everyone can see it globally.

Carrying forward the various leaks and teaser images and videos of Xperia Z1, the day have come when the world will see officially the #bestofSony.

As soon as IFA 2013 event starts you will see “IFA 2013 Live Streaming” here, so bookmark this page and get back to us soon 🙂 Stay tuned to us, we will be live blogging on this page about Xperia Z1 launch at IFA 2013 event.

Below you can see Live Streaming of Xperia Z1 launch at Sony IFA 2013 conference…Countdown has begun now.

IFA 2013 Live Streaming has started, Click on Play Button below.

Xperia Z1 is seen in hands of Red Semi-Transparent Swimsuit models, splashing it in water pool, in another video we just spotted.