Xperia Z3 and Xperia Z3 Compact are finally coming to India as Sony India has started sending press invites for the launch of their latest Xperia flagship series in India on Thursday, September 25, 2014, at 2:15 p.m, New Delhi.

Mr. Kenichiro Hibi, Managing Director, Sony India, will address the press conference just like the last time he did when Xperia Z2 was launched. It is believed that for the time being only Xperia Z3 and Xperia Z3 Compact will be unveiled and Xperia Z3 Tablet Compact and Sony SmartWatch 3 will come later at the end of this year. 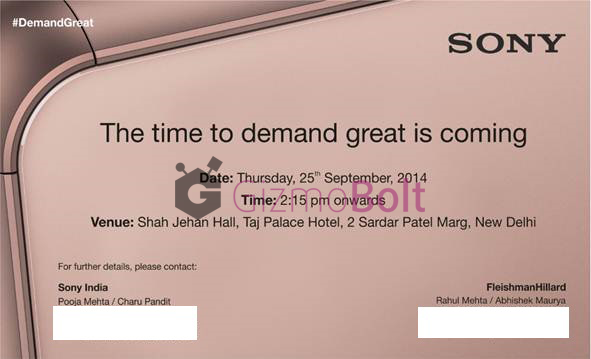 4g LTE model of Xperia Z3 will be hitting Indian market this time.

We will be live blogging the event as it take place on 25 Sept and hands on Xperia Z3 will follow up. Drop your comments below if you have anything to ask.