Sony Mobile has started sending press invites for IFA 2014 Berlin event on 3 Sept where it will hold a press conference to launch its H2 flagship device. It is rumored that Sony will be launching flagship Xperia Z3 and Xperia Z3 Compact with some other exclusive Sony products. 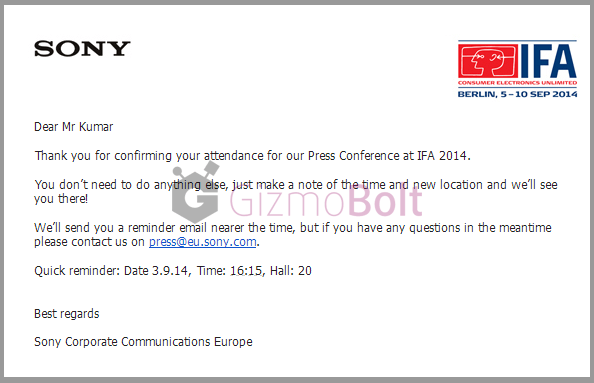 Below you can see glimpse of upcoming Sony Xperia Smartphone to be launched at IFA 2014.

A day back we saw Sony SGP621 tablet listed at Indonesian Postel, we can expect a Sony Xperia Tablet to be launched at IFA 2014. New Sony 4K TVs are also expected.

We may also see QX30 Lens-Style Camera to be unveiled at IFA 2014 event.

Excited for IFA 2014 event ? Let us know if you have any doubts. Drop your comments below.