Sony D6603 is not a new name for us now as we have seen it number of times till now in various leaks. Sony D6603 first marked its appearance in AnTuTu Benchmark Database scoring 32996 points then it appeared again in AnTuTu Benchmark database where its prominent specifications were leaked. Sony D6603 is again back in rumors as about phone screenshot of Sony D6603 just got leaked which shows device running on android 4.4.2 KitKat firmware ( previously seen running on android 4.3 ), though kernel, build number and baseband versions are not shown.

Below you can see the leaked Sony D6603 about phone screenshot. 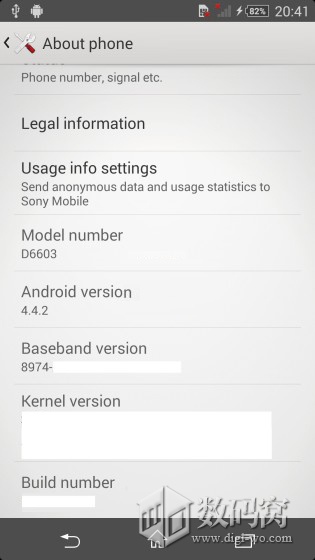 Sony D6603 looks like a high end device but not a flagship model as we are not expecting any flagship from Sony till September, so existence of Sony D6603 is still in shades.

We would love to see an upgraded model of Xperia SP and Xperia C from Sony. We will keep you posted as we get more info on Sony D6603.