Xperia SP Android 4.4 KitKat under investigation now, Will it receive?

Yesterday we saw many Xperia SP users reporting android 4.3 12.1.A.0.266 firmware update on their handset but at present it is only limited for some particular regions, globally roll out is yet to be seen. Sony Mobile has updated today android 4.3 12.1.A.0.266 firmware update changelog for Xperia SP officially on their product support page but a blog post confirming same is yet to be seen.

Check below the status of Xperia SP Android 4.4 KitKat update. 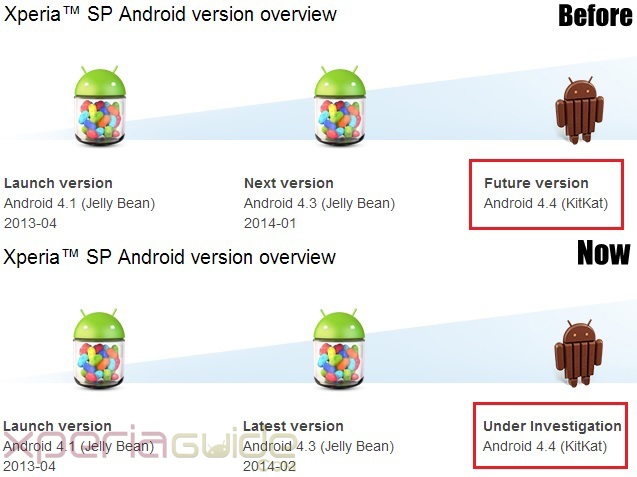 Xperia ZR, Xperia T, TX, V and Xperia SP now reads same status of Android 4.4 KitKat under investigation. May be Sony is now spending time on how well KitKat will be for these devices. Well we hope Sony rolls out KitKat soon for the first batch. It is expected that Sony will reveal their KitKat UI along with Sony D6503 at MWC 2014 event and hopefully after that only we can expect KitKat for Xperia Z family.

Sony has already started working on Android 4.4.2 KitKat 14.3.A.x.xxx firmware for Xperia Z1, Z Ultra and Z1 Compact. What do you think Xperia SP users after seeing this “under investigation” tag. Drop your comments below.