One of the best spot for tech enthusiast GsmArena has organised a unique Smartphone Champions League 2013 battle. Two of the Xperia 2013 devices, the mighty Xperia Z1 and Xperia SP are in the quaterfinal and we need your help to vote for these two Xperia devices to win this battle.

At present Xperia Z1 is competing against another mighty device Nokia 1520 and Xperia SP is competing against LG Nexus 5 and unfortunately both devices are far away in terms of votes to win this battle and to go in semi-finals. So here we request all readers of Xperia Guide and all Xperia fans from world to vote for these devices as soon as possible, every single vote counts.

Click on below link to go to GsmArena website and vote for Xperia Z1 by clicking the link below and click on Xperia Z1 name listed to vote. As you can see in pic below Xperia Z1 is at present far behind from Nokia 1520. 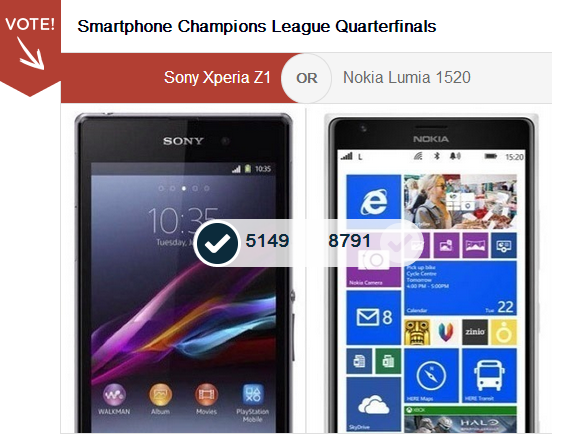 Click on below link to go to GsmArena website and vote for Xperia SP by clicking the link below and click on Xperia SP name listed to vote. At present Xperia SP is also too far from winning just like Xperia Z1. 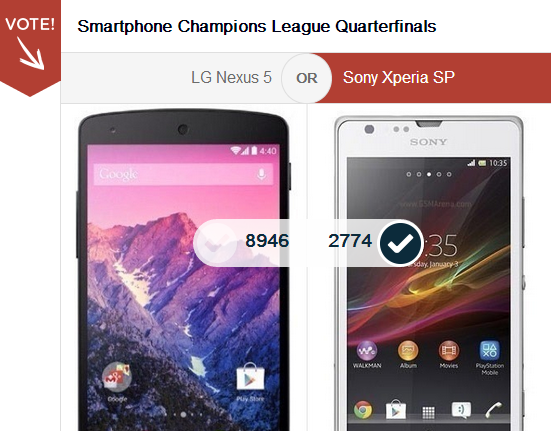 Less than 3 days are left now to vote for Xperia Z1 and Xperia SP as voting ends on December 30, Monday, 10:01 GMT exactly. So we ask all our reader to vote now and let other knows in Xperia community to vote now.


About the Author
Sakshi Bajaj

Founder & Senior Editor of ChewCode.com and Editor at GizmoBolt.com. Sakshi is currently pursuing MCA. She is a foodie and has a unique love for learning computer programming languages. Follow her on Google + | Facebook | Twitter. Contact her at [email protected] for feedback and sending tips. | DONATE!