How to use “adb sideload” method to manually update Nexus device without rooting or using custom recovery ?

As when android 4.4 KitKat was announced by Google officially, their cooperation with KitKat came into light, at the same time Nestle KitKat launched a “KitKat Nexus Promo” worldwide where they mentioned they will get some lucky winners “new Nexus 7 Tablet”. A similar promotion was also running in India and now a few days back Nestle KitKat announced winners of that promo.

It has come to light as winners are stating that KitKat is giving away old generation Nexus 7 2012 Tablet to all winners in India sadly. Let us dig a bit deeper into this matter. KitKat launched this contest in India 27th September 2013 to 22nd November 2013 and stated as “1000 winners will be given as new Nexus 7 Tablet”. Though in there terms and conditions it was not stated that Nexus 7 2013 Tablet will be given but then why Nestle KitKat gave Nexus 7 2013 tablet everywhere except in India, is this deal fair ?

While the winners in India of this contest have been given Nexus 7 2012 tablet, is it fair ? Let’s see what an user “Shravan Bhatt” posted in a Facebook group which has been started to take up this cause. 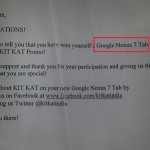 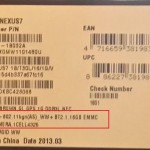 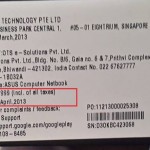 KitKat’s response on this issue

Is it fair for such a brand to act like this. Well in frustration many users asked the same question to KitKat India Twitter account and what they responded to all is “We hear you’re unhappy. Winners got the Nexus7 tabs available in India in Sept (contest date). The new version launched only in Nov.”

We hear you’re unhappy. Winners got the Nexus7 tabs available in India in Sept (contest date). The new version launched only in Nov.

It’s very clear that KitKat has to bear a lot shame on this issue as many popular Indian tech sites have posted about this issue and it is spreading like fire now. KitKat’s response on this issue is very lame, can’t believe they wrote that. When everywhere they are shipping the new Nexus 7 2013 tablet so why not here…

If you are one of the lucky winner of this campaign by KitKat in India, do let us know what’s your thought on this issue, do you feel cheated or you think it is OK afterall it was a freebie. Drop your comments below on this issue.